Ocular hypertension is a condition involving a higher than normal level of pressure within the eyes. A normal pressure reading falls between 10 and 21 mm Hg, so anything greater than 21 mm Hg is considered hypertensive. The increased pressure is caused by a problem in the drainage of the fluid produced in the eye.

Ocular hypertension may strike at any age, but it is most common in people over the age of 40. Other individuals at higher risk for this condition are those with a family history of ocular hypertension or glaucoma, are extremely nearsighted, have diabetes or are African American.

A diagnosis of ocular hypertension is made after the eye pressure is measured using a tonometer. In addition, your doctor will likely perform a physical examination of the structures within your eyes and test your visual acuity and peripheral vision to rule out glaucoma as the cause of high eye pressure. Treatment typically involves medicated eye drops designed to reduce the pressure in the eyes. 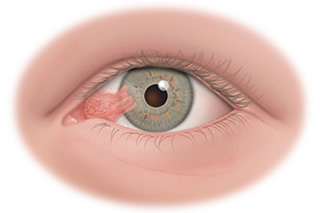 Patients with pterygium often first notice the condition because of the appearance of a bump or discoloration on their eye or because of dryness, itching,  irritation, tearing or redness. Pterygium is usually first noticed when it is confined only to the conjunctiva. At this stage it is called a pingueculum. Once it extends to the cornea it is termed a pterygium and can eventually lead to impaired vision.

Recurrent corneal erosion is a disorder characterized by the abnormal shedding of corneal cells from its outer layer, known as the epithelium. It is often the result of an existing corneal abrasion or a disease such as corneal dystrophy or diabetes. The condition may affect one or both eyes.

The symptoms of recurrent corneal erosion are acute eye pain, irritation or dryness, blurred vision, tearing, redness, sensitivity to light and the sensation of having a foreign object in the eye. These symptoms are often worst upon waking up and, in mild cases, may disappear within a few hours.

Recurrent corneal erosion is diagnosed during an examination with a slit lamp microscope. A fluorescein dye is used to provide contrast so the extent of the erosion will be visible.

This condition is initially treated with saline solution eye drops to help keep the epithelial cells attached to the cornea. Lubricating drops may also be beneficial as they can keep the eye moist. Treating any underlying disease that is responsible for the recurrent corneal erosion is often very effective in resolving the erosion issue as well. In severe cases that do not respond to these measures, a phototherapeutic keratectomy may become necessary. This laser procedure removes the outermost layer of the cornea to encourage the growth of new, healthier cells.

Trichiasis is a condition that involves a problem with the alignment of the eyelashes, causing them to grow inward toward the eye. The eyelid itself remains in a typical position. The most common causes of trichiasis are chronic blepharitis, which is an inflammation of the eyelid, or trauma to the eyelid. Other conditions that may result in trichiasis include herpes zoster, epiblepharon and certain skin disorders.

The typical symptoms of trichiasis are redness, irritation, tearing, the sensation of a foreign body and sensitivity to light. Eventually, the contact of the eyelashes on the eye may result in corneal abrasions and the formation of ulcers. A diagnosis of trichiasis is made upon an examination of the eye.

Treatment of trichiasis generally relies on the removal of the affected eyelashes. When there are relatively few lashes growing toward the eye, the doctor may remove them using forceps under a microscope, but they often grow back the same way. For more permanent relief, electrolysis, radiofrequency, laser or cryotherapy treatments may be used to destroy the follicle so no regrowth can occur.

Uveitis is an irritation and swelling of the uvea, which is the highly vascular fibrous tissue that forms the iris, choroid, ciliary body, and pars plana. It can be caused by autoimmune disorders, infections or foreign toxins, but often the cause is unknown. It frequently manifests in young to middle-aged individuals and may only affect one eye.

The symptoms usually develop quite quickly and unexpectedly, but in some individuals they form slowly. Distinguishing symptoms of uveitis may include:

This may affect the front of the uvea (iritis), the back of the uvea, the middle (the vitreous) or the entire span of tissue. Patients with rheumatoid arthritis, AIDS, herpes, syphilis and direct eye trauma have a higher risk for developing uveitis. If the disorder is not treated, permanent damage to the visual system may occur, including an increased risk for cataracts and glaucoma.

There are several treatments for uveitis depending on the part of the eye that is affected and the severity. In some cases, the underlying condition (herpes, AIDS, syphilis) may need to be treated to see improvement in the uveitis. In other cases patients will be encouraged to wear dark glasses and take pupil dilating drops to relieve pain and pressure. Serious cases usually require extended use of steroid eye drops as well as oral steroids that suppress the immune system.